Restoration Services from an IICRC-Accredited Restoration Firm in Bridgewater 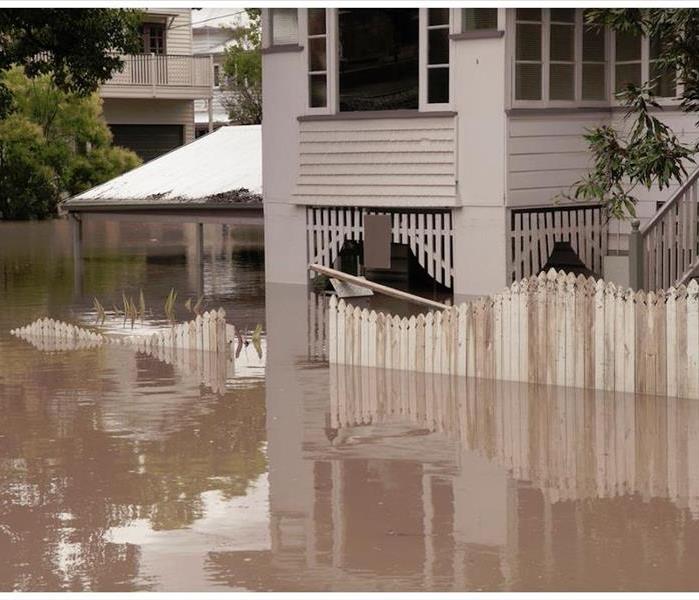 Flooding can quickly damage the exterior and interior of your home. Contact Team SERVPRO for water removal and remediation efforts.

Bridgewater, Massachusetts is a Plymouth County city home to over 26,000 as of 2010, spread over an estimated 28 square miles. This Boston suburb boasts several local forests and conservation areas, including the infamous Hockomock Swamp. This swamp gave rise to rumors of cryptozoological phenomena, alien sightings, and other supernatural stories that have earned it the moniker “Bridgewater Triangle,” referring to the mysterious Bermuda Triangle.

Bridgewater was founded after a land purchase from local tribespeople by Duxbury settlers in 1645. In 1656, Bridgewater was established and has been part of Plymouth County since 1691, when the Commonwealth of Massachusetts was formed.

Notable names from Bridgewater include the following:

One of Bridgewater’s most iconic historical sites is the centuries-old Bridgewater Iron Works on High Street. This foundry was once one of the United States’ largest ironworks and is currently on the National Register of Historic Places as of 2002.

Its story starts in 1707 with David Perkins opening a blacksmithy on a parcel of land he purchased in 1694 from the Massachusetts colonial government. A slitting mill was added in 1985 by Nathan and Isaac Lazell. This was noteworthy because the British crown had banned the construction of new iron mills thirty-five years prior. This would only be the second new mill created after the American Revolution. After adding another mill, the property was processing an estimated 445 tons of iron each year. Mechanic Jacob Perkins would later become a partner at what would be known as Lazell, Perkins and Company.

During the nineteenth century, this company would specialize in a broad array of manufacturing needs, including:

Much of the property was damaged during a 1938 hurricane. At least two facilities were used between the mid-1940s and late 1980s for grey iron castings crafted by the Bridgewater Foundry Company before selling the property in 1994.

Today, the Iron Works has since been donated to the Town of Bridgewater by the foundry’s last owners, the Landner and Brousseau families. It has since been turned into Ironworks park, which sports a bridge, one of the remaining original buildings, and the local highway department.

The Massachusett People and Language

Before European settlers laid claim to the land, the Massachusett called the land “Wompanohkeit,” or “the eastern land,” which also had connotations of dawn and sunrise. The territory that is now covered by a large portion of the Greater Boston Area was referred to as “Nutohkemminnit,” which translates roughly to “place of our land.”

Current members of the Massachusett tribe descend from one of two communities: the Natick and the Ponkapoag. These two peoples were on land considered part of the Massachusetts Bay Colony, which had “Praying districts” for indigenous citizens converting to Christianity. Eliot’s translations and other texts translated based on his orthography are still used as sacred scriptures in Massachusett churches.

The Massachusett language is designated as part of the Southern New England Algonquian (SNEA) languages, which are close enough to be considered regional dialects with minor differences. The Massachusett language was speculated to have been spoken both in the Boston area, the North and South Shores of the Massachusetts Bay, the lower Merrimack River, the Pawtucket of southern Maine, and the New Hampshire coast, among other locales.

What makes the Massachusett language especially significant in American history is its translation and use by John Eliot, who learned the language from translators and interpreters in Natick. He created an English orthography that would be used in the first Bible printed in the Americas. Christian missions would continue to make Massachusett Bibles and educational materials from the mid-seventeenth century until the mid-eighteenth century, after which the language’s use dwindled significantly.

The last speaker of Massachusett is speculated to have passed on near the start of the nineteenth century. The Wampanoag dialect of SNEA persisted and is still in use today, thanks to local language reclamation projects.

The Institute of Inspection Cleaning and Restoration Certification (IICRC) accredited professionals at SERVPRO have extensive training and experience in flood damage mitigation for Bridgewater residences.

In a flood damage scenario, several different cleanup methods are employed to protect homeowners while restoring the property. These include:

Odor control is another essential component of sanitation, including the use of such devices as ultra-low volume (ULV) foggers and hydroxyl generators. After moisture extraction, debris cleanup, structural drying, and deodorization, SERVPRO professionals focus on rebuilding and repairs needed to return your property to a clean, safe preloss state.

SERVPRO of The Bridgewaters ensures that your home looks and feels, “Like it never even happened.” Call (508) 697-5439 for rapid-response disaster mitigation services 24 hours a day, seven days a week, including all holidays.